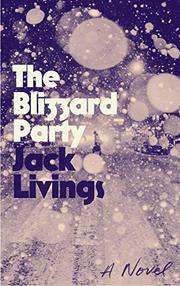 From acclaimed story writer Livings, a first novel that might be called a detour de force: sprawling, discursive, loose-limbed (and impressive).

Our narrator is Hazel Saltwater, daughter of a renowned and prodigiously phobic writer. At 6, she was the still center in the drugged-out maelstrom of a bash held by neighbors in the Apelles, her family's grand Upper West Side apartment building, on the snowy night of Feb. 6, 1978. While watching TV in a back bedroom, Hazel made the peculiar acquaintance of Albert Caldwell, an elderly ex-lawyer who, having confirmed his descent into dementia, earlier in the evening had staged an emergency, slipped away from the hospital, and stolen and crashed a cab on his way to drown himself in the Hudson River. Albert was interrupted in this plot by Vikram, a boy—later Hazel's husband—who delivered him back home to the Apelles and, it turns out, a yet more spectacular fate. That fate became the germ of Hazel's father's most famous book, which starred a fictional version of Hazel. The book we're reading, it soon emerges, is Hazel's own four-decades-later reconstruction of that night, which she treats as a Rosetta Stone to unlock every secret and explore every connection in her life before and since—and in the lives of all those constellated around her. The book ranges with supreme confidence from its titular setting to World War II Europe, 9/11, and beyond. Livings' nearest model may be the doorstop-sized novels of Tom Wolfe...and this book is similarly digressive, maximalist, and prone to old-fashioned manipulations of sentiment. Livings may not quite have Wolfe's journalistic chops, but he's a far more skillful and empathetic novelist, and what seems moralistic and preening in Wolfe's books reads here mostly as playful and nimble, if mildly self-indulgent. One may wonder why a first-time novelist in 2020 would follow the Wolfe/Balzac template for the Novel of Everything...but the fact is that Livings, amazingly, pulls it off.