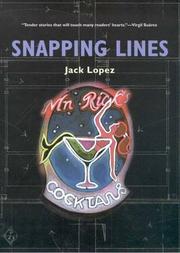 The author of Cholos & Surfers (not reviewed) sends a Latino flicker along the nerves in these 12 stories set largely in the Southwest and southern California. Lopez (Creative Writing/California State Univ., Northridge) mostly takes as his protagonists young Anglo-Mexicans, coming of age in a world without borders, who ask themselves, "Who am I?" After stealing a white Porsche for a joyride down the Coast Highway, young Tony (in "Easy Time") prepares to go into jail for 30 days. His uncle and others teach him how to box and defend himself, while Tony measures these rites of passage against those of his buddies doing "hard" federal time. The more sophisticated hero of "In the South" is Raymond, formerly Ramón, who takes his adulterous wife down to Baja California for a fancy vacation. A drowned woman's corpse becomes a symbol of his marriage: Raymond's beautiful wife is dead to him, despite her willingness to maintain their shattered union. "My Grandfather's Eye" is pink, a symbol of blood-soaked wisdom to grandson Rey, who is trying to find some way to beat the Vietnam draft