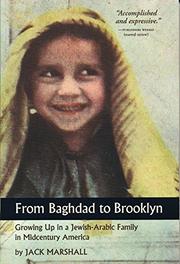 FROM BAGHDAD TO BROOKLYN

Growing up in a Jewish-Arabic Family in Midcentury America

A predictable memoir about an immigrant son’s struggle to find himself.

Poet Marshall’s parents were Sephardic Jews—Dad from Baghdad, Mom from Aleppo—who immigrated to America and entered into an ill-advised marriage in New York. Marshall’s home life was different from those of other Jewish kids in Brooklyn: His parents, for instance, whether swearing or offering praise, denoted God not by the Hebrew “Ha-Shem” or “Eloheem,” but by the Arabic “Allah.” As he moved into adolescence, Marshall had an increasingly difficult time reconciling science and literature with traditional Jewish teaching. As a last ditch effort to shore up faith, he enrolled, on a generous scholarship, in the rabbinical program at Yeshiva University—but he didn’t last long. The siren song of the poets snagged him instead, and he took refuge in the main reading room of the main branch of the New York Public Library, reading “thirsty as a castaway at a free tap,” keeping company with the words of Hart Crane and Dylan Thomas. The end of this memoir finds Marshall setting sail, figuratively and literally: Broke but determined to see the world, he found work on the SS Ferngrove and . . . off he went. The text is littered with too-cute lines (e.g., “any Orthodox rabbi worth his kosher Crystal salt”). Marshall has a unique heritage, but not enough of this story feels original or fresh.

The word “Baghdad” in the title may prompt some readers to pull this from the shelves, but they will likely be disappointed.