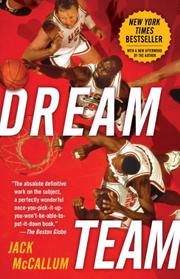 How Michael, Magic, Larry, Charles, and the Greatest Team of All Time Conquered the World and Changed the Game of Basketball Forever

The inside story of the greatest basketball team ever assembled.

The 1992 United States men’s basketball team not only stands as the most talented basketball team ever, but it remains something of a cultural phenomenon that helped make basketball a truly global sport and the NBA an international brand. Longtime Sports Illustrated writer McCallum, who covered the “Dream Team” at the Barcelona Olympics, recounts the process whereby NBA stars cruised to the gold medal, crushing opponents who would later pose for pictures with and ask for autographs from the American players. The author sketches a group biography in which some figures (Michael Jordan, Larry Bird, Magic Johnson and Charles Barkley) perhaps rightfully garner more attention than others and in which even the selection of the team became a source for drama. Unbeknownst to most, Jordan and Magic (recently diagnosed with HIV) jockeyed for alpha-dog status while Bird was happy to cede the spotlight, comfortable in his accomplishments and willing to use the Olympics as a career capstone before retiring. Barkley represented one of the most controversial choices for the team primarily because of his unpredictable nature, which could be endearingly frank or just plain irascible. Ultimately, though, Barkley probably took the greatest pleasure in the Barcelona experience, slipping past the team’s security apparatus to enjoy the nightlife and the Olympic experience. Coach Chuck Daly held the team together in large part because he could masterfully steer the egos without seeming to do so. McCallum tells the story well, albeit occasionally too choppily, and some might find that he inserts himself into the story a bit too freely. However, he also effectively evokes the remarkable team while placing it within the larger historical context.

Basketball and Olympics fans will welcome this nostalgic trip through the recent past.