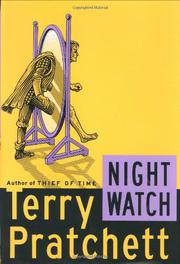 Another Discworld yarn—#28 if you're counting (The Last Hero, 2001, etc.). Commander Sam Vimes of Ankh-Morpork's City Watch has it made: he's a duke, rich, respected, and his wife Sybil is about to give birth. But then Vimes is called away to deal with a notorious and ruthless murderer, Carcer, now trapped on the roof of the university library. Amid a furious storm, lightning and magic hurl Sam and Carcer 20 years back in time. Sam's younger self is a rookie Night Watch cop. History, and Sam's memory, tells that Sam learned his street smarts from a skillful, straight-arrow cop named John Keel. But Carcer's arrived in the past, too—and he's murdered Keel. In the same fight (coincidentally?), Sam received an injury he remembers Keel having. Must he somehow impersonate Keel, and teach young Sam how to survive? What will the History Monks—the holy men who ensure that what's supposed to happen, happens—do? Adding further complications, Sam knows that the current ruler of the city, Lord Winder, is both mad and utterly corrupt: revolution's a-brewing, with riots, street barricades, cavalry charges, and thousands dead. And the horrid Unmentionables, Winder's secret torturers and jailers, must be curbed—especially when Carcer turns up in charge of them.

Not a side-splitter this time, though broadly amusing and bubbling with wit and wisdom: both an excellent story and a tribute to beat cops everywhere, doing their hair-raising jobs with quiet courage and determination.

FROM TIME TO TIME
by Jack Finney
Sci-Fi

A BLINK OF THE SCREEN
by Terry Pratchett
Sci-Fi

THE GLOBE
by Terry Pratchett
Nonfiction

A SLIP OF THE KEYBOARD
by Terry Pratchett
Sci-Fi