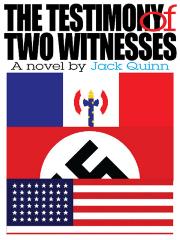 THE TESTIMONY OF TWO WITNESSES

After being suspended from practicing law, Jake Cotnoir’s first case back seems unwinnable. His client, an elderly Frenchman accused of murdering the French deputy ambassador to the United Nations, refuses to divulge his name and shrugs his shoulders every time Jake asks a question. Once a rising star working for Boston’s most prominent law firm, Jake is now broke, sleeping at a friend’s house and doing his best not to fall off the wagon. Quinn’s latest novel combines a legal thriller with a World War II spy plot. As Jake travels to France to unravel his client’s information, he learns he might be in over his head: Powerful people on both sides of the Atlantic are willing to go to extreme, even murderous lengths to make sure the silent Frenchman doesn’t divulge his secrets. The compelling mystery is often genuinely suspenseful. Quinn crafts a clever plot that encompasses Nazis, the French Resistance, the Jewish Defense League, unethical reporters and shady government agents—even FDR and Hitler make direct, personal impacts on the characters. However, the novel’s structure holds it back. Narrative momentum is drained by awkwardly inserted infodumps and pages of back story, and characters tend to incessantly pontificate in long speeches. At times, Quinn seems so intent on making sure the reader understands his intentions and appreciates the Nazi-era French suffering that he veers from satisfying storytelling into historical preaching. Readers will ache to get back to the actual story. Jake, an appealingly complicated character who suffers from bipolar disorder, often plunges into deep, dark depression; however, this diagnosis isn’t made until nearly the end of the novel. Until this key development, readers will be somewhat mystified by his actions and unlikely to understand why Jake, suddenly gripped by exhaustion, becomes “too frightened to take the five steps to the single edged blades in the bathroom cabinet that would give [him] relief.” Ultimately, Quinn’s novel feels too long and full of distracting subplots, as when Jake tries to “scare straight” a friend’s teenage son, with unwelcome results.

In need of more focus on the mystery and tighter reins on the plot and its structure.