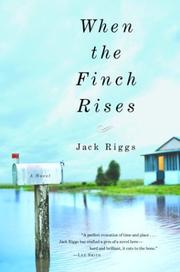 WHEN THE FINCH RISES

A stilted, self-conscious debut chronicles one of those defining boyhood friendships that changes life forever.

The year and the friendship that transform adolescence are by now a familiar cliché. Though southern author Riggs tries to give them literary heft by turning the flight of finches into metaphors to frame the narrative, the story is essentially a collection of types and incidents—promising much but never delivering, as the predictable cast of doomed characters inevitably mess up. Set in the 1960s in a small North Carolina town on flood-prone Finch Creek, the story is told by Raybert, who lives with his unstable mother Inez. Daddy, a former GI, has a drinking problem and is often away, and Raybert’s best friend Palmer lives across the street. Palmer is slight for his age, has a flaming birthmark on his head, and regularly consults with RC, his dead father. His mother has a new man in her life, Edgar, a hard-drinking pervert, who takes and collects photographs. When Raybert turns 13, his life becomes even more complicated as Palmer steals one of Edgar’s photographs that shows a lynching of a local African-American. The picture clearly shows Raybert’s Daddy as part of the mob. With this to ponder, the year starts going into free-fall as Daddy comes back and tries to woo Inez with a new garden that’s soon destroyed by the flooding Finch Creek; and Inez has a miscarriage, breaks down, and is hospitalized. Meanwhile, Palmer increasingly angers the abusive Edgar with his pert comments. Palmer, whose mother is as abusive as Edgar, dreams of running away to Myrtle Beach with Raybert as soon as he can reach the pedals of RC’s 1965 Pontiac Catalina, currently parked in the drive. As Edgar gets the Pontiac running and notches up his abuse, Raybert’s Daddy moves out and Raybert goes to live with his wealthy aunt and uncle. Poor Palmer isn’t so fortunate.

Tired and familiar territory, but not without some promise.