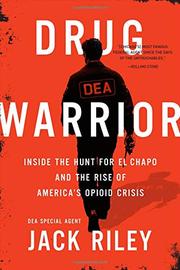 As Riley’s memoir opens, he’s on the run, being chased on a Texas highway into New Mexico by hit men in the employ of Joaquín Guzmán Loera, better known as El Chapo. He was outgunned, but somehow he got out of it, whereupon he turns back the clock to the beginning of his career. After turning down an offer from the more prestigious FBI, he joined the DEA and went to war against the Colombian cartel, then personified by Pablo Escobar, whose “real-life narrative was straight out of a Hollywood gangster movie.” Escobar was also a smart businessman who knew a market when he saw it, flooding the insatiable United States with cocaine. By Riley’s lights, El Chapo was worse yet, a vicious criminal who conducted at least some of his enterprise from the safety of a Mexican prison. The author notes that El Chapo wasn’t just involved in cocaine and marijuana, but was a leading purveyor of opioids: “While I believe that many are responsible for our nation’s drug crisis, including unscrupulous doctors, pharmacies, wholesale drug distributors, drug companies, and the banking industry, none played a bigger criminal role than El Chapo.” Flushing him out of hiding after his escape from prison and getting him extradited to the U.S. was no easy matter, but it provides a satisfying payoff to Riley’s eventful story. There’s a by-the-numbers aspect to the narrative, including the requisite tough-guy language (the bad guys are “scumbags” and “jagoffs,” among other choice epithets), as well as complaints about the typical bureaucratic hassles involved in honoring the Fourth Amendment. But Riley is an equal-opportunity despiser of those who got in the way, including actor Sean Penn (“an exploitative asshole”) and Utah congressman Jason Chaffetz ("This dickhead had no idea how hard I worked, or even what DEA agents did”).

A sturdy, unadorned tale of true crime and its foes.