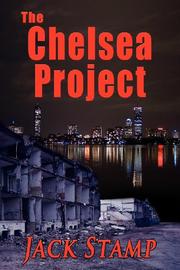 With his family, future and life threatened, an ex-Marine with a finely tuned moral compass takes on gangsters, corrupt politicians and the FBI.

Making his way through an airport parking lot, Bill Conors presses his vehicle remote to locate his car. An explosion rocks the building, destroys his vehicle and sets the stage for an action-filled series of events. An ex-Marine and successful engineer with a beautiful family, Conors has poured his heart and soul into the reclamation project of the contaminated Boston waterfront neighborhood known as “the Chelsea Project.” His biggest investment and vision for the future, the project has promise as a prime waterfront location for commercial development and subsequent financial success. When a mysterious toxic spill and a spectacular set of explosions threaten the project, Conors’ world is turned upside down. Stamp uses his keen ability for creating characters that are believable and engaging, despised or admired, to create a colorful cast of good guys and bad boys. The local mob boss steps up for a piece of the action; when he visits Conors to demand a cut, the visit turns deadly. Conors goes on the run as the gangster’s family becomes hell-bent on revenge—they believe Conors to be part of the Russian mafia, so a mob war ignites that shakes the crime world. With a sophisticated degree of tension, Stamp takes Conors on the run as he tries to stay ahead of the mob and the FBI, leaving his wife and family to  believe he has been kidnapped or killed, all in order to protect them. He cunningly crisscrosses the country to avoid capture, culminating in a surprising and complex confrontation. Stamp skillfully weaves all the components of a fast-paced, hold-your-breath work of crime fiction into a novel that has it all: mobsters, government agents, crooked politicians and a good-guy-vigilante.

A crafty, clever page-turner to the very end.