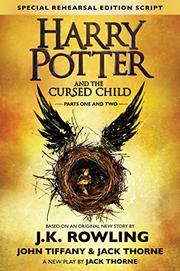 HARRY POTTER AND THE CURSED CHILD

The Official Script Book of the Original West End Production

The Boy Who Lived may be done with Voldemort, but Voldemort’s not done with him.

Blocked out by all three co-authors but written by Thorne, this play script starts up where Harry Potter and the Deathly Hallows (2007) leaves off, then fast-forwards three years. As the plot involves multiple jaunts into the past to right certain wrongs (with all but the last changing the future in disastrous ways), the last Triwizard Tournament and other already-familiar events and locales figure prominently. Also, many favorite characters, even Dumbledore and Snape, trot back onstage to mingle with the now–school-age offspring of Ron, Harry, and Draco. In a fan-fiction–style stretch, the child of He-Who-Must-Not-Be-Named also plays a part. In the early going at least, the authors faithfully recapture the series’ lively character interplay, and one scene aboard (and atop) the Hogwarts Express particularly echoes some of the original cast’s heady misadventures. And there are measures of banter, tongue-in-cheek dialogue (“HERMIONE: Who are you calling intense?”), and evocative if skimpy stage directions: “[Harry] feels intense pain in his forehead. In his scar. Around him, Dark Magic moves.” But the spellcasting and dramatic crescendos don’t play as well on the page as they might on the stage; the dozens of short, quick-cut scenes chop up the action for readers rather than building dramatic tension. Moreover, the bonding between classmates Albus Potter and Scorpius Malfoy, two self-described “losers,” and the adult Harry’s labored efforts to connect with his alienated middle child distract from a dark-is-rising-again storyline that already leans on unlikely contrivances as it makes its way to a climactic wizardly duel.

Rowling’s name on the cover will guarantee mad sales, even for an unadventurous spinoff like this.