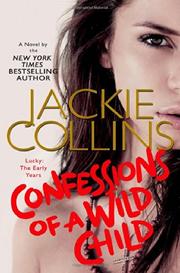 CONFESSIONS OF A WILD CHILD

Collins (The Power Trip, 2013, etc.) returns with the story of her beloved Lucky’s teenage years.

Growing up in the lap of luxury isn’t what it’s cracked up to be. Despite living in a palace replete with tennis courts and servants to attend to her every whim, Lucky realizes that she and her brother, Dario, are just prisoners in a posh jail. Certainly her mobster father, Gino, wants to keep his children safe (after all, their mother was murdered in the swimming pool), but at 15, Lucky is already champing at the bit to live a little more on the wild side. Ironically, being sent to an elite boarding school in Switzerland is her big chance. At L’Evier, she meets Olympia Stanislopoulos, who quickly initiates her into the dark arts of smoking, drinking and sneaking out to meet boys. Sexually curious, Lucky is eager to practice “almost.” Soon enough, Lucky is kicked out of school, angering Gino, who ships her off to another school, where the shenanigans resume. Lucky stews over her crush on Marco (her father’s driver), Gino indulges in an affair with a movie star (the delightfully named Marabelle Blue), Dario begins a potentially dangerous affair, and Olympia drags Lucky into more trouble. Despite all the (not particularly explicit) action, Lucky’s tale has a fairly flat plotline. Part of the trouble in building tension lies with Lucky’s own gimlet-eyed stoicism. She is, indeed, her father’s daughter, and nothing will distract her from her ultimate goal of becoming Gino’s successor. Even the potentially catastrophic arranged marriage to a senator’s son is met with bemused calculation rather than horror.

Even the staunchest fans of the Santangelo family may be disappointed with this rather thin addition to the saga.