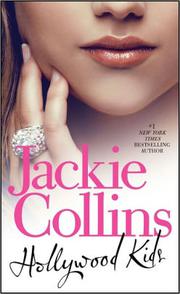 Egomaniacs in fast cars, Armani-clad spoiled rich kids, their movie mogul parents, ``lavishly appointed'' Tinseltown homes, and always-sensational sex—it's Collins romping on her well-trodden but ever-fertile ground. Jordanna Levitt and her pals—precocious, underachieving children of the movie industry's most important and dysfunctional families—are known as ``The Hollywood Five.'' Jordanna is a slut without ambition, Marjorie Sanderson is suicidal, Shep Worth is in the closet, Grant Lennon and Cheryl Landers operate a call girl operation. When she's bounced from the mansion of her producer dad and his pregnant, younger-than-she-is new wife, Jordanna takes a job as the assistant (and later costar) of ``incredibly good- looking'' movie star/director Bobby Rush, the child of a brilliant but cruel famous actor. Their devastating physical attractions and broken homes make the two kindred spirits, but Jordanna's got a problem that even a top Bel Air psychotherapist couldn't solve: She's being hunted by a madman against whom she testified at his trial for murder. Luckily for her, handsome Brooklyn cop Michael Scorsinni has just relocated to L.A. He and a top-notch celebrity reporter for Style Wars, the gorgeous and down-to-earth Kennedy Chase, team up to stop the crime (as well as grapple with their own lives' melodramas) and in so doing, fall in love. All this races in front of a backdrop of superlatives: the hottest clubs, the harshest drugs, the seamiest sex, the meanest mafia, and the prettiest posers. The Hollywood Kids are palimpsests upon which are listed the traumas of the trust fund; Michael and Kennedy are cut from the ``beautiful but damaged'' cloth; supporting characters (the black cop buddy, the lusty Latina newscaster) are straight from Central Casting. Plot, though suspenseful, offers few surprises. Still, it's a Porscheload of fun. It's logical: Hollywood Wives and Hollywood Husbands breed Less Than 9 Zero 210 offspring. (First printing of 500,000; Literary Guild main selection; author tour)