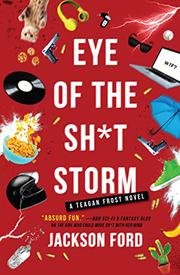 EYE OF THE SH*T STORM

In a post-quake Los Angeles, a psychokinetic government agent is on the run from...pretty much everyone.

Seeing as Teagan was already in the middle of a high-speed chase with a murderous biker gang, not much could have made her day worse. Except maybe getting an accidental face full of the meth she stole from said biker gang. Now she’ll have to deal with the next crisis while coming down from her unintended high. Because if there’s one thing we know about psychokinetic government operative Teagan after two frenetically fast-paced adventures—most recently Random Sh*t Flying Through the Air (2020)—it’s that there’s always another crisis on the way. Sure enough, no sooner is the high-speed car chase situation resolved (with maximum destruction) than someone electrifies an entire building, which should be impossible, and Teagan’s team is dispatched to figure out if this impossible situation might have been caused by another kid from the mysterious School, a kid with extranormal powers. Unfortunately, that means they’re all a little too busy to worry about why their comms have been disrupted or who tipped off the biker gang that they were coming. Fans who’ve been along for the ride on Teagan’s previous two outings know what to expect by now, and this third installment fully delivers, with a breakneck pace, high stakes, and plenty of wisecracks. This adventure sees Teagan separated from her team, on the run from the government, the aforementioned biker gang, and a truly terrifying adversary known as the Zigzag Man—in other words, pushed to her absolute limits both physically and emotionally. The result is gripping, suspenseful, and thoroughly enjoyable.

An un-put-down-able, action-packed adventure that packs an emotional punch.