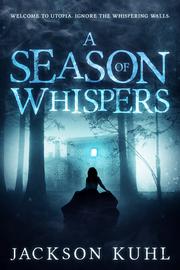 A SEASON OF WHISPERS

In Kuhl’s gothic horror novel, a man fleeing his past joins a remote commune where things go bump in the night.

In 1844 Connecticut, carpenter Tom Lyman has just bought a membership to Bonaventure Farm, an experimental commune where everyone shares the labor and fruits of the harvest. At the request of the commune’s founder, David Grosvenor, Lyman is renovating the derelict stone house that served as the farm’s original dwelling. No one has lived in it for a century, since the family that built it died out. Lyman takes up residence and sets to work, glad to be far from New York City—and the crimes he secretly committed there. On his first night in the house, however, Lyman wakes to hear the sound of a violin coming from the basement, which, for some reason, has a crossbeam across its door, as if to keep something from escaping. There are also mysterious, thunderlike noises coming from the ground, and no one seems to know their cause. Despite these peculiarities, Lyman settles into life on the farm, cozying up to Grosvenor’s daughter, Minerva, and trying to hide the fact that he isn’t a skilled carpenter. As days pass, however, the secrets of the Bonaventure property—and the secrets of Lyman’s own past—threaten to erode the man’s sanity, particularly after he starts hearing strange whispers. Over the course of this novel, Kuhl’s atmospheric prose evokes the formality of the time period, as when Lyman attempts to convince himself he didn’t hear what he thought he heard: “He only believed he’d heard a voice. Those syllables, like the violin of the first night, were nothing but the strange breezes moving under the house…creating whispers and whistles just as breath does across the lip of a flute.” Kuhl also provides all the familiar elements of gothic horror for fans of that genre—ruins, secrets, preternatural happenings—with some intriguing original mysteries surrounding the setting and the protagonist. The creepiness builds at a swift pace and, at just over 120 pages, the novel ends right where it should.

A slim but delightful tale of terror set in transcendentalist New England.