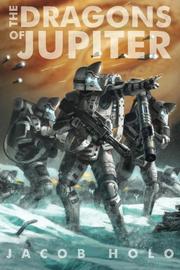 THE DRAGONS OF JUPITER

An entertaining sci-fi action novel with light overtones of dystopian and political thrillers.

In Holo’s debut, set in a future version of our solar system, two brothers find themselves divided by interplanetary war. Kaneda and Ryu Kusanagi are from Europa, a moon of Jupiter, and both are veterans of a past war against a tyrannical artificial intelligence that sought to conquer humanity. In that conflict’s aftermath, they’ve chosen different sides in a new struggle. Kaneda, who hates AIs, fights alongside soldiers called Crusaders as they seek to destroy Matriarch, a “quantum mind” AI who was once human. Ryu, however, is a commando warrior with the Dragons, who fight the Crusaders with stealth and cunning in an effort to protect Matriarch, who guides Europa’s society. Kaneda, however, sees her as a computerized dictator and his old way of life as a lie. The Crusaders pit their powered-armor suits against the Dragons’ enhanced reflexes and invisibility technology. The brothers’ personal conflict is played out on a grand stage with the fates of Europa and three other worlds—Earth, Luna and Jupiter—in the balance. The story sticks to a familiar adventure style, and the battle between the brothers is an old chestnut of melodrama, but it’s told with gusto and conviction. The vivid secondary characters mostly avoid falling into stock types, and some plot twists and moral ambiguity add a bit of sophistication. The strong action scenes are fast-paced throughout (although often harsh and gory), the dialogue flows well, and the fictional world is detailed, plausible and well-designed, from its planets to its spaceships. The author isn’t afraid to show the more grotesque sides of society, which may seem off-putting to some readers, as when characters debate the merits and flaws of using technology to reanimate dead soldiers. There are some typos and minor grammatical errors but nothing that readers will find particularly distracting. The story builds to a satisfying conclusion, and naturally, the author leaves room for sequels.