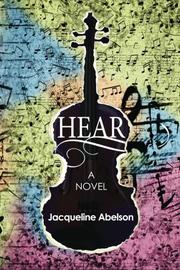 Facing an imminent operation that will leave her permanently deaf, a teenage girl tries to make certain that her life is in order before the world of sound vanishes forever in this debut novel by college student Abelson.

Seventeen-year-old Charlotte Goode suffers from a rare genetic disorder called Type II Neurofibromatosis that causes tumors to constantly pop up along her nervous system. Now she has found out that tumors are growing on her auditory nerves and that the operation to remove them will leave her permanently deaf—a frightening prospect made even worse by her love of music. As the operation approaches, her boss at the music magazine gives her an assignment to pick a local band for a benefit. Both of the boys who lead the respective bands in contention attract her, and she doesn’t know which to choose. As she wrestles with the decision, her family life is in upheaval. Will she be able to resolve everything before her operation? This is an impressive first novel by the author, who based it on the accounts of a woman who suffered from Type II Neurofibromatosis. Although most characters are well-drawn and complete, the best is Charlotte. She faces life and the news of her impending deafness with a mixture of wry observations and down-to-earth practicality, with nary a trace of self-pity. The author wisely refrains from filling pages with rhapsodic descriptions of the sound of birds, the roar of the ocean, the whispering of the wind, etc., which would have quickly grown tiresome and maudlin. The plot of the book is trite, basically boiling down to: Who is Mr. Right? What saves it from being an After School Special is how Charlotte handles her impending deafness with maturity. An unsatisfying note is struck by Charlotte’s brother-in-law, who seems to not like Charlotte because of her illness. One wishes that he would suffer just a little comeuppance for his mean-spiritedness. Otherwise, the novel moves smartly to its conclusion, with plenty of poignant moments along the way.

An absorbing story about how it sometimes takes silence to make a person hear.