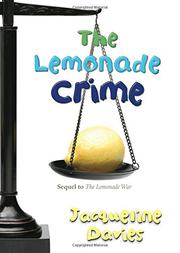 From the Lemonade War series, volume 2

This sequel to The Lemonade War (2007), picking up just a few days later, focuses on how the fourth graders take justice into their own hands after learning that the main suspect in the case of the missing lemonade-stand money now owns the latest in game-box technology.

Siblings Evan and Jessie (who skipped third grade because of her precocity) are sure Scott Spencer stole the $208 from Evan’s shorts and want revenge, especially as Scott’s new toy makes him the most popular kid in class, despite his personal shortcomings. Jessie’s solution is to orchestrate a full-blown trial by jury after school, while Evan prefers to challenge Scott in basketball. Neither channel proves satisfactory for the two protagonists (whose rational and emotional reactions are followed throughout the third-person narrative), though, ultimately, the matter is resolved. Set during the week of Yom Kippur, the story raises beginning questions of fairness, integrity, sin and atonement. Like John Grisham's Theodore Boone, Kid Lawyer (2010), much of the book is taken up with introducing courtroom proceedings for a fourth-grade level of understanding. Chapter headings provide definitions  (“due diligence,” “circumstantial evidence,” etc.) and explanation cards/documents drawn by Jessie are interspersed.

Readers will enjoy this sequel from a plot perspective and will learn how to play-act a trial, though they may not engage with the characters enough to care about how the justice actually pans out. (Fiction. 8-10)