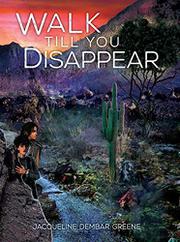 WALK TILL YOU DISAPPEAR

A survival story about a wounded boy who is lost and injured in the Arizona desert in 1872.

A twist on the usual captivity Western, the story of young Miguel Abrano begins with the usual Native American clichés. Raised on a horse ranch in Arizona, young Miguel is a devout Hispanic Catholic who dreams of becoming a priest. But when Miguel’s father takes in a foreign traveler and asks him to translate an old family story written in a secret code, his well-laid plans fall apart. Shocked to learn that he and his family are secretly Sephardic Jews, Miguel rides angrily into the desert, where he is kidnapped by Apache warriors. Only after he escapes these men does he meet a kind Tohono O’odham boy named Rushing Cloud, who is escaping Indian boarding school and immediately agrees to help him. Per usual in the Western, the bad Natives are violent while the good Natives risk their own lives to educate the non-Native character and give him important spiritual lessons. The book’s saving grace is the twist: Young Miguel amends his judgmental Christian attitude after being inspired by Rushing Cloud. Miguel not only learns how to survive in the harsh desert—hunting, cooking, and tracking like an expert—he also learns to accept his complicated cultural inheritance.

The desert is brought to life in a scenic novel with an important lesson about humility.