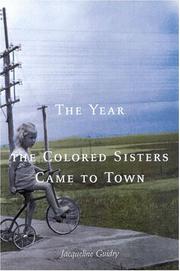 THE YEAR THE COLORED SISTERS CAME TO TOWN

An endearing chronicle of the year 1957–58, when a black nun from Brooklyn comes to rural Louisiana to teach at a Catholic elementary school.

Ten-year-old narrator Vivien Leigh Dubois possesses that charming provincialism common among literary children: she is by turns ignorant, instinctively wise, and easily shocked. The story opens with the news that Vivien’s Aunt Deacy is to bear a “change of life” baby—though Vivien has no idea what that means. Newcomer Guidry nicely captures the customary ways of rural Ville d’Angelle, as Vivien, her sister, Mavis, and their colored friend, Marydale, tumble through the summer picking and canning figs, trapping frogs to make meals of the legs, and patiently bearing the perdurable heat. When Vivien’s Daddy gets word that a pair of “colored” nuns are slated to teach at his daughters’ school, he establishes a Concerned Citizens group that raises money to bring an elderly white teacher out of retirement. He also encourages Mavis to replace Marydale as her best friend. Meanwhile, tensions begin to heighten between Vivien’s Mama and housekeeper Aussie (Marydale’s mother), who have been friends since girlhood. Though one of the teaching appointments is blocked, Sister Pat ends up teaching Vivien. With her tales of seeing Joe DiMaggio hit for the Yankees and her lessons on the poetry of Langston Hughes, Sister Pat opens Vivien’s eyes to a larger world beyond Ville d’Angelle. A month into classes, someone burns a cross on the school’s front lawn; shortly after, the school itself is set on fire. Sister Pat never returns, Aussie is dismissed from the Dubois home, Mavis and Vivien enter public school. Aunt Deacy’s baby does indeed bring changes to life.

Sometimes ponderously paced, but Guidry piles up vast heaps of detail that ultimately reward the reader with a vivid evocation of this place, in this time. A small story told through a girl’s widening eyes: evocative and charmingly written.