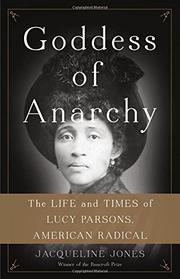 The Life and Times of Lucy Parsons, American Radical

Tough-minded biography of a fiery revolutionary whose activism spanned the decades from Reconstruction to the New Deal.

Bancroft Prize winner Jones (Chair, History and Ideas/Univ. of Texas; A Dreadful Deceit: The Myth of Race from the Colonial Era to Obama’s America, 2013, etc.) evinces considerable respect for her subject, a woman born into slavery who gained fame in 1880s Chicago as one of the anarchist movement’s most vocal advocates of violent revolt. But the author finds plenty to criticize about Lucy Parsons (1853-1942), beginning with her decision, when she left Texas with her white husband, Albert, to disguise her racial identity and to almost entirely ignore the plight of African-Americans as she battled for the working class. Jones deplores the couple’s praise of “the dear stuff dynamite” as an instrument of liberation—loose talk that helped convict Albert and seven other anarchists of conspiracy to murder in the wake of an 1886 demonstration in Chicago’s Haymarket Square even though none of them threw the dynamite that killed seven policemen. The biographer’s sympathies are clearly with more pragmatic radicals like Mother Jones, who argued that the anarchists’ theatrical tactics and rhetoric were distractions in the struggle for real reforms like the eight-hour working day. Jones also finds distasteful Lucy’s embrace of traditional gender roles, promoting herself as the widow of a Haymarket martyr and plugging her self-published copies of Albert’s biography at every opportunity while leading a sexually free life and railroading her son into an insane asylum after a quarrel. Nonetheless, the author acknowledges Lucy’s gifts as an orator and salutes her refusal to be relegated to a subordinate role by her male comrades. “In the end,” she concludes, “there are few lives that are not a bundle of contradictions and shortcomings.” Parsons remained committed to radical causes throughout her long life and gave her last speech, to a group of striking workers, scarcely a year before her death in 1942.

Comprehensive and fair, though a little more warmth toward Parsons would have made the book more engaging.