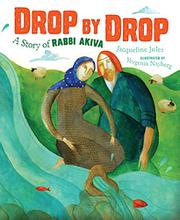 A Story of Rabbi Akiva

A devoted wife is the inspiration behind a noted scholar of Judaism.

Rachel, a rich man’s daughter, falls in love with a poor, illiterate shepherd named Akiva who works for her father. She recognizes that a man “with such goodness in his heart, who understood so much about life, must be smart.” Her father disowns her, but they marry and she encourages him to study even though he is 40. Akiva is reluctant, but one day he observes the power of water to slowly erode stone and realizes that “I can learn—just like water cuts through stone—a little bit each day.” He begins attending school with children, masters Hebrew, and then leaves home for many years to study Torah. Akiva becomes the revered sage of Judaism, “a wise rabbi followed by thousands of students.” His wife is never forgotten. The historical Akiva lived and studied in the first century CE, after the destruction of the Temple in Jerusalem, and worked to codify Judaism’s oral laws into the Mishnah portion of the Talmud. Jules has based her warmly told narrative on legends of the sage and his wife. Nayberg’s richly textured illustrations are stately and sculptural, depicting Rachel and Akiva with pale skin and red hair.

Even those not familiar with Rabbi Akiva’s monumental achievements will be moved by his devotion to learning and his wife’s loving encouragement.