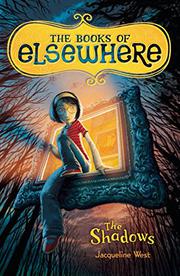 The Books of Elsewhere, Volume 1

Preoccupied parents, a solitary young girl, talking cats—sound familiar? Unfortunately for debut author West, not only has this been done before, it’s been done better. Still, the premise is intriguing. Magical spectacles enable the wearer to enter the worlds captured in paintings created by an evil, long-dead wizard. “Captured” isn’t just a figure of speech: At least one young boy has been turned into a painted replica of himself. Another painting, that of the wizard’s (also dead) granddaughter, comes creepily to life. In general, though, the action is sluggish and the ominous atmosphere contrived. Characterization is skimpy at best. Olive’s parents adore math. Olive doesn’t. The cats are pompous, imaginative and martial, respectively. Ironically enough, it’s not just the supernatural effects that fail to convince. Would parents, even those utterly obsessed with their own intelligence and interests, really leave their 11-year-old home alone overnight? The fact that they do precipitates Olive’s final confrontation with the wicked wizard. Unfortunately readers probably won’t care much about who wins nor about the possibility of volume two. (Fantasy. 10-12)