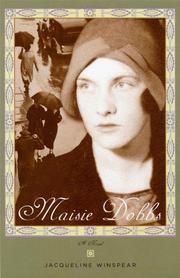 A romance/investigation debut novel set firmly in the spiritual aftermath of WWI.

Maisie Dobbs, recently turned private investigator in 1929 England, had been a nurse back during the war to end all wars, so she knows about wounds—both those to the body and those to the soul. It’s just a month after she sets up shop that she gets her first interesting case: What initially looks like just another infidelity matter turns out to be a woman’s preoccupation with a dead man, Vincent Weathershaw, in a graveyard. Flashback to Maisie’s upbringing: her transition from servant class to the intellectual class when she shows interest in the works of Hume, Kierkegaard, and Jung. She doesn’t really get to explore her girlhood until she makes some roughshod friends in the all-woman ambulance corps that serves in France, and she of course falls for a soldier, Simon, who writes her letters but then disappears. Now, in 1929, Maisie’s investigation into Vincent Weathershaw leads her to the mysterious Retreat, run like a mix between a barracks and a monastery, where soldiers still traumatized by the war go to recover. Maisie knows that her curiosity just might get her into trouble—yet she trusts her instincts and sends an undercover assistant into the Retreat in the hopes of finding out more about Vincent. But what will happen, she worries, if one needs to retreat from the Retreat? Will she discover the mystery behind her client’s wife’s preoccupation with a man who spent time there? And by any chance, albeit slight, might she encounter that old lover who disappeared back in 1917 and who she worried might be dead? Winspear rarely attempts to elevate her prose past the common romance, and what might have been a journey through a strata of England between the wars is instead just simple, convenient and contrived.

Prime candidate for a TV movie.