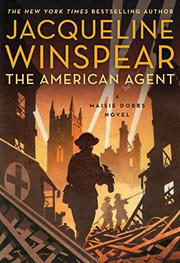 September 1940 finds England nightly suffering the horrors of the Blitz. The morning after volunteer ambulance drivers Maisie Dobbs and her best friend, Priscilla Partridge, spend an evening with Catherine Saxon, an American print reporter who hopes to work for Edward R. Murrow, whose radio reports have done so much to change America’s isolationist views, Maisie gets a call from Robbie MacFarlane, whose hush-hush job has required her services before. Acting on the recommendation of American agent Mark Scott, whom Maisie met while spying in Germany, Robbie asks her to investigate a murder—that of Catherine Saxon, whose throat was cut in her own lodgings sometime after her night out with Maisie and Priscilla. Maisie—a widow, nurse, spy, psychologist, and independent enquiry agent—finds Scott strangely uninterested in the case, perhaps because he has his own fish to fry. Maisie’s first look at the body reveals marks of a strangulation attempt, a tiny tattoo of the initials JT, and signs of a prior pregnancy. She interviews Cath’s best friend, Jennifer Barrington, and also the other women living in the house. Cath comes from a wealthy political family. Her father, an isolationist senator who just wanted her to make an advantageous marriage, had virtually cut her off. Jennifer acknowledges that Cath had a child who died while she was reporting in Spain. She can’t name the father, but she does know that Cath has dated an American flying with the RAF and has been visited by other unidentified men. Maisie gets some help from Scott, and their partnership tacks toward romance, but his calculated reserve prevents her from trusting him. After Priscilla is badly burned rescuing several children, Maisie has more time to devote to her investigation, whose disparate clues will lead to a shocking finale.

Winspear (To Die but Once, 2018, etc.) advances Maisie’s inspiring activities, highlights the bravery of an embattled people during the Second World War, and intimates that lessons from that period have yet to be learned.