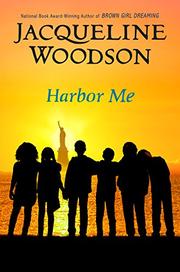 Just before she begins seventh grade, Haley tells the story of the previous school year, when she and five other students from an experimental classroom were brought together.

Each has been bullied or teased about their difficulties in school, and several face real challenges at home. Haley is biracial and cared for by her white uncle due to the death of her African-American mother and her white father’s incarceration. Esteban, of Dominican heritage, is coping with his father’s detention by ICE and the possible fracturing of his family. It is also a time when Amari learns from his dad that he can no longer play with toy guns because he is a boy of color. This reveals the divide between them and their white classmate, Ashton. “It’s not fair that you’re a boy and Ashton’s a boy and he can do something you can’t do anymore. That’s not freedom,” Haley says. They support one another, something Haley needs as she prepares for her father’s return from prison and her uncle’s decision to move away. Woodson delivers a powerful tale of community and mutual growth. The bond they develop is palpable. Haley’s recorder is both an important plot element and a metaphor for the power of voice and story. The characters ring true as they discuss issues both personal and global. This story, told with exquisite language and clarity of narrative, is both heartbreaking and hopeful.

An extraordinary and timely piece of writing.