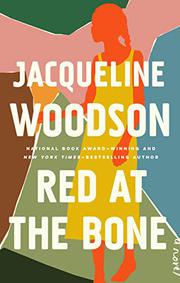 RED AT THE BONE

Woodson sings a fresh song of Brooklyn, an aria to generations of an African American family.

National Book Award winner Woodson (Harbor Me, 2018, etc.) returns to her cherished Brooklyn, its “cardinals and flowers and bright-colored cars. Little girls with purple ribbons and old women with swollen ankles.” For her latest coming-of-age story, Woodson opens in the voice of Melody, waiting on the interior stairs of her grandparents’ brownstone. She’s 16, making her debut, a “ritual of marking class and time and transition.” She insists that the assembled musicians play Prince’s risqué “Darling Nikki” as she descends. Melody jabs at her mother, Iris, saying “It’s Prince. And it’s my ceremony and he’s a genius so why are we even still talking about it? You already nixed the words. Let me at least have the music.” Woodson famously nails the adolescent voice. But so, too, she burnishes all her characters’ perspectives. Iris’ sexual yearning for another girl at Oberlin College gives this novel its title: “She felt red at the bone—like there was something inside of her undone and bleeding.” By then, Iris had all but abandoned toddler Melody and the toddler’s father, Aubrey, in that ancestral brownstone to make her own way. In 21 lyrical chapters, readers hear from both of Iris’ parents, who met at Morehouse, and Aubrey’s mother, CathyMarie, who stretched the margarine and grape jelly sandwiches to see him grown. Woodson’s ear for music—whether Walt Whitman's or A Tribe Called Quest's—is exhilarating, as is her eye for detail. Aubrey and little Melody, holding hands, listen to an old man whose “bottom dentures were loose in his mouth, moving in small circles as he spoke.” The novel itself circles elegantly back to its beginning, Melody and Iris in 2001 for a brava finale, but not before braiding the 1921 Race Massacre in Tulsa, Oklahoma, to the fires of 9/11. The thread is held by Iris’ mother, Sabe, who hangs on through her fatal illness “a little while longer. Until Melody and Iris can figure each other out.”

In Woodson, at the height of her powers, readers hear the blues: “beneath that joy, such a sadness.”