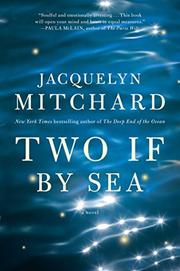 TWO IF BY SEA

After losing his wife and unborn son in a tsunami in Australia, an expat horse trainer adopts a psychic 3-year-old.

As Mitchard’s (Second Nature: A Love Story, 2011, etc.) latest novel opens, a killer wave hits Brisbane. Among the victims are ex-cop Frank Mercy’s pregnant wife and almost her entire extended family. Dazed and grief-stricken, Frank joins the volunteer rescue efforts the next day, coming to the aid of a woman and two small boys in a van that is half underwater. He plucks out the littler child, but before he can get to the others, the vehicle is swept away. When the devastated Frank returns to his family’s horse farm in Wisconsin a few weeks later, he takes the components of an unexpected new life: the boy (whom he has not bothered to legally adopt), a huge horse named Glory Bee, and a young Irish groom. By this time he's learned that the boy he named Ian, who rarely speaks, has a telepathic gift—he can enter the minds of enraged people and make them calm down and be nice. Animals, too, as Frank sees when they descend into the cargo hold of their international flight, where Glory Bee and other zoo and domestic animals are going wild from the turbulent ride. “The boy had to jump back after the first time he touched Glory Bee’s leg through the…wooden slats of the makeshift stall.…She was roaring, cantering in place. But the second time Ian touched her, she stopped, and if she were a woman, Frank believed he would have seen her stand there, sobbing.” Frank recognizes the possibility that Ian’s power could easily be used for evil—and soon enough, it becomes clear that very bad people are hunting him down, murdering those who get in their way. Meanwhile, Frank meets another woman, an equestrian psychiatrist who asks him to train her and her horse for the Olympics. As his heart begins to heal, he faces the challenge of protecting Ian from the mounting threat.

A troubled protagonist, beset by disaster and malefaction, is touched by magic as he develops new emotional connections.