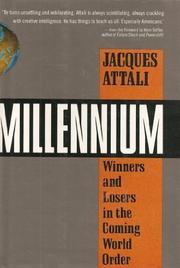 Winners and Losers in the Coming World Order

A gratingly Delphic speculation on which regions might gain dominion in the global village by the turn of the century and beyond. In assessing what the future may hold for latter-day superpowers and their challengers, Attali (a longtime advisor to French President Mitterand who became the first head of the European Bank for Reconstruction & Development, an institution created to give erstwhile Soviet satellites a fighting chance of adjusting to capitalism's Darwinian rigors) offers two main scenarios. In one, the so-called Pacific sphere (an area, anchored in Tokyo, that encompasses not only developed and developing states in East Asia but also all nations in the Americas) emerges victorious in the ongoing struggle for supremacy. In the other, the Continent's common-market countries prevail. Unless they mend their improvident ways, the author predicts, the US and USSR will continue to suffer both absolute and comparative decline since economic rather than military might will determine the winners of this high-stakes game. Such trouble spots as Africa, China, India, and the Middle East are not even in the running, he asserts, though they retain a boundless potential for destabilizing mischief. As the competition for geopolitical ascendancy intensifies, Attali predicts, prosperous, privileged elites will have the means to roam the earth in pursuit of personal fulfillment and/or corporate profit while hordes of have-nots barely subsist in crowded backwaters. In the brave new millennial world dimly foreseen by the author, the planet as well as huddled masses will be ranked among the biggest losers if humanity does not halt its depredation of the environment. In similar small-is-beautiful vein, Attali argues against taking bioscience and other advanced technologies too far. For all their flash and filigree, the author's provocative, albeit carefully hedged, prophecies can be described most charitably as rooted in flights of fancy, not systematic analysis. In brief, then, a quasi-apocalyptic vision that's neither conclusive nor convincing.