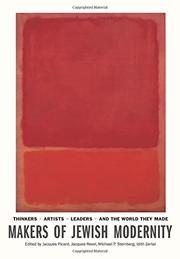 Thinkers, Artists, Leaders, and the World They Made

An intellectual history of 20th-century Judaism.

An adept crew of editors and writers takes on the arduous task of documenting two difficult-to-define concepts: modernity and Judaism. The result is a hefty collection of 44 biographical essays of Jews born as early as the 1850s and as late as the 1950s. The editors identify a full range of individuals to profile, from poets to artists to scientists to politicians. The work begins with a somewhat cumbersome introduction authored by the four editors. “Modernity…can be understood, as we have seen, as a border- and contact-zone: as liminal spaces and liminal times, in which rituals of transformation and of renewal and conversion are believed and staged—and this is expressed in a great deal of critique.” Indeed, each contributor puts forth his or her own expression of what “modernity” is—at least in regards to their own particular subject matter. Various themes run throughout the book, perhaps chief among these being assimilation. Virtually every person profiled is or was, in one way or another, “assimilated” into another, non-Jewish culture. In some cases, that assimilation was muted, though quite real (Abraham Isaac Kook); in other cases, it was quite complete (Simone Weil). Socialism is another recurring theme, as various individuals promoted or at least confronted the new realities of socialist theory and practice in 20th-century Europe. Of course, also playing significant roles are such motifs as anti-Semitism, Zionism, and the inescapable reality of Hitler’s reign. Readers will find an impressive range of personalities from a wide variety of disciplines, including the arts (Mark Rothko), the sciences (Freud, Einstein), literature (Elsa Lasker-Schüler, Kafka, Bellow, Levi, Lispector), statecraft (David Ben-Gurion), philosophy (Buber, Derrida), and a host of others.

A worthwhile collection for scholars and readers interested in Jewish affairs.