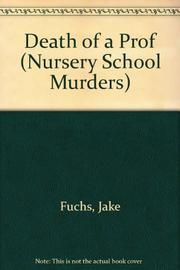 DEATH OF A PROF

It’s a wonder that Berkeley teacher Maren Matthews (Death of a Dad, 1998) doesn’t just throw herself off the jungle gym at Hillside Nursery School and end it all. Her husband Aaron, a little-published Edith Wharton scholar, is so frustrated by his inability to earn pay incentives (called, for some unknown reason, “farties”) at second-tier San Francisco State that he stops taking his anti-depressants, causing him to speak. To her. In cryptic bursts. Incomprehensible! Her charges are little thugs who bop everyone in sight—except for sad-sack Boris Pownall and almost-mute Deirdre Blake, whose short-tempered parents, involved in some kind of mammalian research, disregard Maren’s requests not to send soup for lunch. But Diane Blake not only Fails to Follow Directions, she Is Disrespectful Toward Others, dumping her husband and child to run off to Las Vegas with more successful Wharton scholar Cedric McAulay. Derek Blake Does Not Control His Impulses and, according to Diane, Runs With Sharp Objects, decapitating McAulay in the Matthews’ kitchen. But somehow, Maren doesn’t entirely trust Diane’s account of the murder, and instead of smothering herself in a vat of Play-Doh, launches her own investigation, uncovering a scheme in which corporate greed and institutional incompetence conspire as players push their private agendas.

Two installments into his Nursery School Murders series, Fuchs seems mired in the sandbox, his notion of satire limited to poking fun of foreign accents, detailed descriptions of hyenas’ genitals, and endless repetition of the word “farties.”