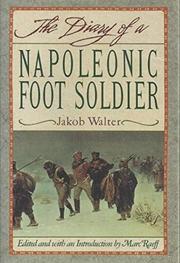 THE DIARY OF A NAPOLEONIC FOOT SOLDIER

As France's empire expanded during its postrevolutionary era, Napoleon began requiring vassal states to supply troops for his acquisitive causes. Among those caught in the conscription net was Jakob Walter, a young German stonemason who marched with the Corsican usurper's foreign legions on three campaigns (including the disastrous invasion of Russia) between 1806 and 1813—and who left an ex post facto memoir of his military service, which surfaced as a treasured family heirloom in America's Midwest during the Depression and was first published by the Univ. of Kansas in 1938. Human interest apart, Walter's stolid and narrowly focused account of his life as a soldier is longer on curiosity than historical value. Drafted in 1806, at age 18, to fight against Prussia, he was recalled in 1809 for a war with Austria and in 1812 when Napoleon moved his 600,000-man Grand Army into the heart of Russia. Walter's recollections of this catastrophic expedition, from which barely 25,000 returned, represent the longest and most absorbing portion of his narrative. Totally disinterested in the geopolitical implications of either the advance on or retreat from Moscow, the author bears oddly detached witness to the hardships and dangers endured by the bootless offensive's survivors. Nor did Walter much care about the outcomes of the battles in which he fought. Indeed, the main concerns of the author and his comrades seem to have been getting enough to eat in a country with few agricultural resources, avoiding crippling wounds, and returning safely home. Absent big-picture perspectives and contextual detail, Walter's recollections amount to little more than an intriguing footnote to 19th-century military history. The text includes an appendix with six unrelated letters home (unearthed by a Soviet researcher in 1978) from six Westphalian conscripts serving in the Grand Army, plus 20 b&w engravings (not seen).