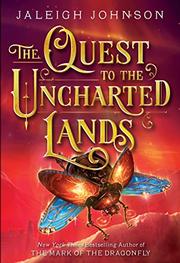 THE QUEST TO THE UNCHARTED LANDS

Stella Glass won’t stand for being left at home while her healer parents embark on an exploratory voyage via airship to the uncharted lands. So, like any forward-thinking, industrious, stubborn trailblazer, she stows herself away in the ship’s hull. It isn’t long before she realizes she’s not the only one camping among the cargo. Cyrus, with whom she immediately butts heads, claims he is there to ensure the ship’s safe travel, but Stella isn’t convinced. It isn’t until a faceless (in actuality, face-changing) man nearly kills them both—and crashes the ship—that Stella realizes just how much Cyrus and his mysterious powers of protection are needed (and how much she digs him). While The Secrets of Solace (2016) was a respite from the hearty steampunk aesthetic of The Mark of the Dragonfly (2014), the metallic, gear-shifting flavor returns in this third book set in Solace. Without much delving into cultural identifiers, Stella and Cyrus occupy the white default in this fantasy world of quasi-humans, face-shifters, telepathic species, and a winged reptilian race. With a pace that doesn’t let up, the combustible action is interwoven with the need to decipher what is exploration and what is invasion: does anyone ever really come in peace? Hopefully.

A full-throttle fanfare for those with a predilection for alchemy, adventure, and a little anarchy.