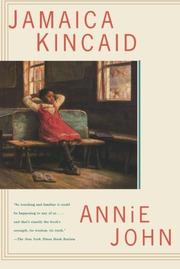 Rarely does a writer move as surely forward as Kincaid does in this plain, sharp, affecting first novel--which abandons the mannerisms and pretensions that made her debut story-collection, At the Bottom of the River, so uneven and frustrating. In eight short autobiographical chapters (most of which originally appeared in The New Yorker), narrator Annie John traces her childhood on the island of Antigua from age ten to seventeen--with the emphasis always returning, quietly yet in a constant interplay of warmth and pain, to Annie's relationship with her regal, demanding mother. In ""Figures in the Distance,"" Annie becomes aware of, then fascinated by, death and funerals--lingering at the funeral parlor when she should be picking up fish from the fisherman; still, though punished for her disobedience and her lies, Annie receives her good-night kiss as usual from her mother. . . so all is well. (""It was in such a paradise that I lived."") Soon, however, as Annie gets older, the world changes subtly yet terribly: ""Because of this young-lady business, instead of days spent in perfect harmony with my mother, I trailing in her footsteps, she showering down on me her kisses and affection and attention, I was now sent off to learn one thing and another."" The years that follow bring a series of tiny yet dreadful mother/daughter skirmishes--Mother's search for Annie's stash of forbidden marbles, Annie's escalating lies and thieveries, Mother's sarcastic accusations--while Annie finds substitutes for her paradise-lost in passionate friendships: soul-mateship with schoolmate Gwen; a fiercer relationship--""pinching by her, followed by tears from me, followed by kisses from her""--with the dirty, strong, secret ""Red Girl."" And finally, after Annie recovers from months of mysterious, paralyzing illness, she sets off for nursing school in England--dreading the future but determined to leave her present life (""I especially never wanted to lie in my bed and hear my mother gargling again""), still torn between love and hostility right up to the last minute on the deck of the ship. Poetic without a angle intrusive image, emotional without a trace of hysteria, evocative without a bit of self-conscious exotica: a model, in fact, of selective, invisibly artful autobiographical fiction--truly capturing the agonizing give-and-take of parent/child love that goes delicately, yet irrevocably, awry. (""I could not be sure whether for the rest of my life I would be able to tell when it was really my mother and when it was really her shadow standing between me and the rest of the world."")