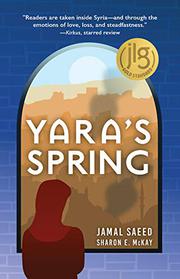 Yara was only 10 when the Arab Spring began and Syria became the center of a brutal civil war.

By the time she was 14, the old days when she skipped through the streets to meet her friend Shireen for dance classes were gone. Aleppo was split in two, and anyone trying to cross between East and West Aleppo could be shot dead by snipers. Yara spent her days indoors behind boarded-up windows as President al-Assad’s helicopters mercilessly dropped bombs. One of these bombs kills Yara’s parents and leaves her trapped under rubble. Miraculously, she, her Nana, and her little brother survive, and they—along with Shireen and her twin brother—begin a slow, hazardous journey to Jordan. They endure long weeks of zigzagging through back roads, bribing corrupt soldiers, and facing danger, thirst, and exhaustion. Even once she reaches safety in Canada, Yara wrestles with guilt and ambivalence over leaving Syria; the trauma and anxiety of losing one’s home, family, and friends never fading. The novel, inspired by Saeed’s own experiences, confronts reality head-on with no attempt at romanticizing the fight for democracy or the unimaginable conditions children are forced to face in their struggle for safety. Through Yara’s eyes, readers are taken inside Syria—and through the emotions of love, loss, and steadfastness in the face of death.

A tribute to refugees that shows them as the courageous survivors of unimaginable trauma.