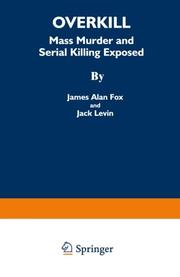 A successfully realized and unique overview of an up-to-date police methodology—the new science of psychological forensics— that has grown apace with serial murder, and a plethora of cases, famous and obscure, that illustrate it. Fox and Levin (Mass Murder, not reviewed) carefully enumerate the three types of mass murderers: sociopaths who kill for thrills and self-aggrandizement; political and psychotic fanatics (i.e., the Manson ``family''); and ``thrill killers,'' who statistics indicate may constitute two-thirds of all serial killers. At this point the authors introduce the new psychological profiling techniques developed by behavioral scientists at the FBI. These profiles comprise a kind of ``template'' that is used as an investigative tool; they include the murderer's age, race, sex, marital and employment status, possible criminal record, relationship to the victim, and likelihood of committing future crimes. For example, the typical serial killer is intelligent, socially and sexually competent, a first- or second-born child, and a skilled worker. He lives with a partner, is mobile, drives a relatively new car, and follows his crime in the media. Contrary to popular mythology, he is not a nomad or a recluse and hardly ever uses a firearm. The authors develop this material in fascinating detail, explaining such factors as ``linkage blindness,'' an obstacle to detection arising when a killer commits felonies in multiple jurisdictions, even if consistent in modus operandi. (Enforcement personnel in various jurisdictions do not always talk to each other.) Compelling revelations for serious students of mass murder; for those whose interest is mainly macabre, there are plenty of side trips into the bubble and squeak of cases both famous and obscure.