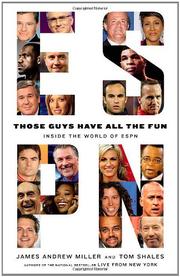 THOSE GUYS HAVE ALL THE FUN

Inside the World of ESPN

Journalist Miller and Pulitzer Prize–winning TV critic Shales (Live from New York: An Uncensored History of “Saturday Night Live,” 2003) chronicle the unfathomable growth of the self-proclaimed “Worldwide Leader in Sports.” In 1979, the entrepreneurial father/son tandem Bill and Scott Rasmussen hatched a hair-brained business plan: a 24-hour cable “entertainment and sports programming network”—or, as it came to be known, ESPN. The improbable rise from fly-by-night operation in the backwater of Bristol, Conn., to the world’s most powerful sports brand is an epic tale, replete with scandals and skeletons the authors dutifully cover. Many of these will be old news to fans of blogs like Deadspin that are dedicated to bringing down the ESPN juggernaut, but it’s the cutthroat negotiations with partners and sponsors, the ingenious (and occasionally disastrous) attempts to innovate and the ongoing clash of conservative company policy with flamboyant on-air talent that will hook readers. The interviewees—who include former chairman Steve Bornstein, current president George Bodenheimer, fan favorites Chris Berman, Dan Patrick and Keith Olbermann, and dot-com star Bill Simmons—range from closely guarded to bluntly self-interested in their commentary, requiring the authors to find the right mix of breadth of opinion and storytelling acumen—a balance they strike with admirable consistency over the course of nearly 800 pages. Inevitably, repetition creeps in as subjects hammer home the same themes, and the authors sometimes shift topics when more commentary is called for on the prior one. These are minor quibbles, however, in a definitive account that not only manages to offer insight into a pop-culture phenomenon’s seemingly impossible success (sometimes in spite of itself), but also highlights how that success irrevocably altered the cable landscape. A championship effort by two men who can rightfully lay claim to having written the book on ESPN.