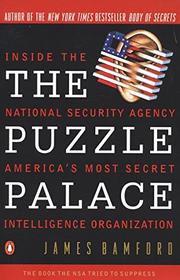 THE PUZZLE PALACE: A Report on America's Most Secret Agency

An unprecedented array of information--piddling to ultrasensitive--on the history and workings of the National Security Agency (NSA), the hush-hush behemoth charged with breaking codes and intercepting global communications. Bamford's disclosure of a governmental attempt to reclaim two declassified documents--and of their contents--made news earlier this year. The British winced at word of shady US-British collaboration. American interest focused on NSA domestic surveillance. And there will be further, deeper discomfiture: what Bamford lays out, albeit erratically, is a picture of an agency established in secrecy (via a 1952 Truman memo of unknown contents), bound for years by no laws (unlike the FBI and the CIA), and little restrained today by the 1978 Foreign Intelligence Surveillance Act (implemented by a secret court). . . even as electronic signal intelligence (SIGINT), the NSA specialty, has come to far exceed the capability of old-fashioned ""human intelligence""--and now has the potential, via signals intercepted from communications satellites, of eavesdropping on anyone anywhere. Bamford does not tell this story consecutively, systematically, or always judiciously. After a crisp, dramatic background chapter (on pioneer code-breakers Yardley and Friedman, and some previously undisclosed muzzling of the former; on WW II SIGINT), he sets up his material under cryptic topical headings--Anatomy, Penetration, Platforms, Targets, Fissures, Partners, Competition--and then proceeds to stuff in whatever he happens to have unearthed. Thus, ""Anatomy"" consists of a camera-eye description of NSA's Maryland headquarters, thumbnail sketches of successive NSA directors and vice directors, and rundowns on NSA components--in all of which hyperbole (endemic throughout) coexists with a maze of ""MPRO became C Group, and the Collection Division became W Group"" minutiae (also a constant). ""Penetration,"" in turn, blows up a few 1960s defections. But ""Platforms"" brings particulars on NSA monitoring stations worldwide. ""Targets"" details the 1960s'-70s domestic surveillance operations (re suspected subversives, drug-dealers, designated others) and demonstrates how NSA ""watch lists"" grew ""from the hundreds into the thousands""; ""Fissures"" reviews the Pentagon Papers-Church Committee sequence of uncoverings; ""Partners"" charts the British connection; ""Competition"" covers the threat from business and academic technological initiatives. And a final section, ""Abyss,"" points out not only the weaknesses of the Surveillance Act but also the threat to ""innocent"" Americans. The book will undoubtedly be more cited than read--and it makes no attempt to assess (or even really describe) NSA's foreign surveillance operations, its #1 function. But it's a feat of sheer investigative research, regardless.