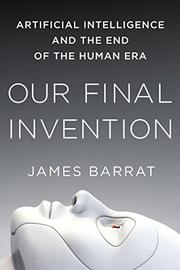 Artificial Intelligence and the End of the Human Era

Cars aren’t out to kill us, but that may be a side effect of building cars, writes documentary filmmaker Barrat in this oddly disturbing warning that progress in computers might spell our extinction.

Computers already perform essential tasks in our national infrastructure and daily lives, including several beyond the capacity of the smartest individual—e.g., playing chess or competing against humans on Jeopardy. While dazzling, these accomplishments are too specialized for the artificial intelligence the author and the many philosophers, scientists and entrepreneurs he interviews have in mind. Within decades, computers will operate at the speed of a human brain and become rational, allowing them to learn, rewrite their own programs to learn better, solve problems better, make decisions and perhaps create more computers like themselves. Having reached this level, they have achieved artificial general intelligence. Inevitably, working on their own without human input, they will exceed human intelligence by factors of 100 and eventually thousands, achieving artificial superintelligence. Many experts assert that the first ASI machine that humans invent will be our last invention due to the fact that it will leave man’s brainpower in the dust. Whether or not designers build friendliness or empathy into these machines (no one is doing that now), no ASI computer is likely to defer to our interests any more than humans deferred to, say, mice, bison or even indigenous tribes as they spread across the world.

As researchers on climate change know, warnings of future disasters are a hard sell. Enthusiasts dominate observers of progress in artificial intelligence; the minority who disagree are alarmed, articulate and perhaps growing in numbers, and Barrat delivers a thoughtful account of their worries.