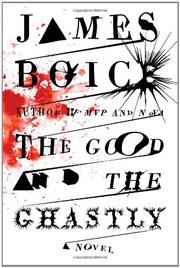 THE GOOD AND THE GHASTLY

A thousand years after the apocalypse or Armageddon or something, Visa Second America finds history repeating itself through an attempt to recast civilization from its ashes.

The third and most audacious novel by Boice (NoVa, 2008, etc.) is futuristic without being science fiction or even speculative fiction. Because except for the fact that Visa has now branded itself on pretty much everything (from the name of every country to psychological conditions including “Visa Schizophrenia and Visa Bipolar Disorder”), the 34th century isn’t appreciably different from the present. Maybe young people are a little meaner and more desperate, and maybe ruling officials are more corrupt in their relations with organized crime, but the author’s social commentary plainly sees these as matters of degree rather than transformation: “They were sociopaths. But they were human beings. And human beings are all alike. Always have been, always will be.” Such are the reflections of the protagonist and frequent first-person narrator, Junior Alvarez, an Irishman (yes, it’s that kind of novel), engaged in interminable conflict with the Italians. The reader meets Junior as an incarcerated juvenile delinquent, who thinks he’s the reincarnation of Alejandro el Grande (until he realizes that Bob Dylan is the reincarnation of Alexander the Great, and that he, Junior, is the reincarnation of Bob Dylan, writer of such classics as “Imagine,” “Auld Lang Syne” and “Beat It"). He later becomes a flunky, a hoodlum, a combination community leader and drug pusher and, through the novel’s extended finale, a crook on the lam. In a plot that seems more like a graphic novel or a screenplay than the literary fiction to which it seems to aspire, he finds himself pitted against a mother whose son he battered in a street brawl. Much of the novel that isn’t narrated by Junior finds his female adversary wreaking vengeance against society in general and stalking Junior in particular. Justice is served…maybe.

Stop this world, you’ll want to get off.