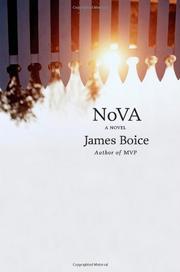 A sardonic novel that seethes with rage, yet lacks the stylistic command to fulfill its ambition.

The sophomore effort from Boice (MVP, 2007) has more power and narrative propulsion than his debut, but it suffers from some jarring shifts in tone. The title refers to northern Virginia, a suburban nowhere satellite of Washington, D.C., where fathers work for the military, mothers teach school or stay home, and teenagers fail to escape the numbness of their existence through getting stoned and having sex. “Starting at puberty, kids in Northern Virginia start going around muttering like a mantra that they hate Northern Virginia and can’t wait to leave,” writes Boice, though his novel leaves little hope that any of them will ever escape, and that even those who make a geographical departure will carry the disease of dead-end American consumerism with them. Meanwhile, most of their parents are leading empty lives in unsatisfying marriages, with some addicted to indiscriminate promiscuity and/or Internet porn. The novel begins on November 2, 1998, with the body of 17-year-old Grayson Donald hanging from a basketball rim. It ends on the same night, in the same place, returning full circle to the graphic details of Grayson’s death. The rest of the narrative shows what led Grayson to this fate, though he doesn’t seem appreciably more disturbed than the rest of his fellow high schoolers leading aimless lives or the parents who are clueless about the lives of their kids (and perhaps their own lives as well). As bleak as this novel may be, there are savagely funny episodes concerning random sex and one surrealistic orgy of serial vomiting. Yet the writing lacks a coherent narrative voice, one that wouldn’t mix dozens of words obscure or invented (“gungulation,” “meshanteries,” “fimetic,” all in the same paragraph) with lazy clichés (“brain fart,” “stinking drunk”).

The narrative is powerful and the characters compelling, when the writing doesn’t undermine the novelist’s considerable promise.