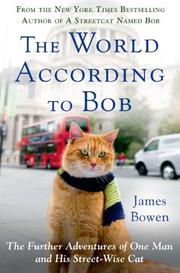 THE WORLD ACCORDING TO BOB

The Further Adventures of One Man and His Street-Wise Cat

The continuing story of a London busker and his feline friend, Bob.

For those who read A Street Cat Named Bob (2013) and wondered what happened to the dynamic duo of James, a former drug addict and vendor for the street newspaper The Big Issue, and his cat companion, Bob, look no farther. Bowen expands on the story of his former life as a drug addict and the many ways Bob continues to be his faithful friend. "I always said that we were partners, that we needed each other equally,” he writes. “Deep down I believed that wasn't really true. I felt like I needed him more." When Bowen was struck by an unrelenting pain in his leg, making it impossible to stand or walk, Bob was there to help him through it. When the author had a severe chest cold, once again, Bob indicated through his small gestures, like resting his head on Bowen's chest, that he understood Bowen was ill and empathized with him. Seeing a stranger overdose in his own apartment stairwell jolted Bowen to fight his own cravings. "An addict is always living on a knife's edge…all [the destructive behavior] needed was one moment of weakness and I could be on the way down again,” he writes. While Bowen steadily worked his way out of addiction, silly cat moments, such as Bob's fascination with packaging, especially bubble wrap and boxes, kept him amused and happy. But he still had self-doubts about his life. Nosy strangers insisted Bob was being maltreated, and other vendors accused Bowen of breaking vending rules, which caused his license to be suspended. Then, everything changed with the unexpected success of his first book, which Bowen acknowledges is entirely due to his best friend, Bob.

A simple, heartwarming story of continued companionship and mutual trust and respect. Though the book is averagely written, it is sure to be another best-seller.