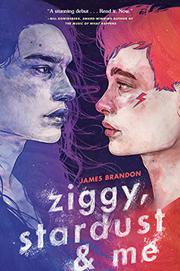 ZIGGY, STARDUST AND ME

Jonathan has asthma, a deadbeat dad, and one friend—biracial (black and white) Starla. He suffers homophobic slurs and physical bullying at school while secretly—and willingly—attending conversion therapy sessions with harmful side effects. Jonathan copes by retreating into his imagination, where he speaks to his idol, Ziggy Stardust (Jonathan feels like “some space oddity who’s landed here on earth”). When Starla leaves for the summer, Jonathan connects with Web, an Oglala Lakota boy from out of town who also endures slurs and violence. When they move beyond friendship to something more, Web helps open Jonathan’s eyes to what his gut has been telling him all along: Being gay isn’t wrong. Readers will be immersed in Jonathan’s close first-person narration, characterized by his own lingo and tendency to escape into his own head. Debut author Brandon deftly incorporates historical events and realities, including the criminalization of homosexuality, the Vietnam War, Watergate, the occupation of Wounded Knee, and police brutality against Native people. Web is a rich character with a backstory of his own, though both he and Starla do all the heavy lifting when it comes to educating Jonathan about contemporary social justice movements that he, focused inward on his traumatic home life and own identity crisis, has remained ignorant of.

A poignant depiction of a boy’s journey to accepting his gay identity despite the odds.