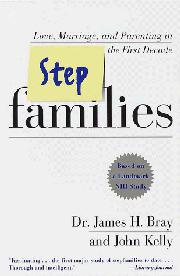 Love, Marriage, and Parenting in the First Decade

A handbook for blended families that offers some substantive advice, based on a 10-year longitudinal study by Bray, presented with the help of Kelly (co-author, The Secret Life of an Unborn Child, not reviewed). As a clinical psychologist, Bray (Family Medicine/Baylor Coll. of Medicine) worked frequently with stepfamilies and knew that up to 60 percent of second marriages that include stepchildren do not succeed. With funding from the National Institutes of Health, he recruited 200 families—all Texas-based, generally white and middle or working class, with a biological mother and a stepfather as the family core—in a search for information about why this is so. He found each family unique in its struggle to create a close-knit and loving home but was able to identify three general categories and three stages that predict the degree of success. The categories are the Neotraditional family, where husbands and wives emphasize the relationship rather than themselves; the Romantic family, least likely to succeed because expectations are unrealistic; and the Matriarchal family, where the mother is highly competent and dominant. All stepfamilies, whatever their type, follow a pattern of ups and downs, according to Bray. As with a first marriage, the first two years, when children and adults are sorting out their relationships and coming to terms with shadows of the first marriages, are the hardest. The next three or four years are more tranquil as compromises have been made, but the third cycle can see stress and conflict again, as children and parents endure adolescence. One major obstacle to the emerging stepfamily: stepparents who move too quickly to take over the parental role. Detailed and evocative case histories illuminate discussions of these various landmarks in stepfamilies— lives, including the sometimes disruptive but vital role of former spouses. A step up for stepfamilies, who may not fit exactly into the pigeonholes described but can take comfort and guidance from Bray’s findings.