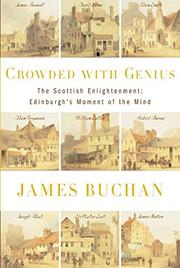 The Scottish Enlightenment: Edinburgh’s Moment of the Mind

A lively portrait of the city once called the “Athens of the north”—and for good reason.

As English novelist and journalist Buchan (Frozen Desire: The Meaning of Money, 1997, etc.) writes, the Edinburgh of 1745 was “inconvenient, dirty, old-fashioned, alcoholic, quarrelsome, and poor.” Then came the Battle of Culloden Moor, which has been called the last fight of the medieval era, and the de facto annexation of Scotland by England, all of which caused Scotland’s great minds to flock to the city; remake it by draining lochs, building bridges over gullies, and constructing sturdy houses and public buildings; and down a sea of coffee, tea, and whiskey while conjuring up marvelous ideas. In 1755, Diderot and company, Buchan writes, still devoted only “a single contemptuous paragraph” to the whole of Scotland, but only seven years later Voltaire was proclaiming that all the best ideas about everything “from epic poetry to gardening” were coming from the Scottish citadel. What had happened in that short span was nothing short of a Gaelic renaissance, in which philosophers such as David Hume, Adam Smith, and Adam Ferguson, poets such as James MacPherson and Robert Burns, and practical and theoretical scientists such as James Black and James Hutton were crossing disciplinary boundaries, talking with one another, and advancing new learning that quickly spread across the Western world. An Athens it may have been, but these celebrants made of Edinburgh (“a classical town rescued from the frigid by a Gothic town rescued from the grotesque,” Buchan writes in a memorable turn) a kind of Sparta, too, which insisted that commerce and industry were insufficient without virtu. Whatever the case, Buchan makes a good argument for its having been a great place to be. If he’s a little imprecise on how Edinburgh eventually became a vital center of European civilization, he does a nice job of describing daily life among its intellectual set, of charting their ideas, and of evoking days gone by.

A readable companion to Arthur Herman’s like-minded How the Scots Invented the Modern World (2001).