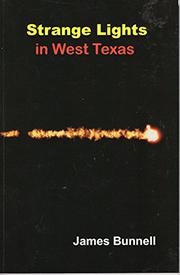 An author sums up his research into an ongoing, unsolved mystery, the enigmatic lights seen at night around ground level near Marfa, Texas.

Bunnell, a Texas native with 37 years in the aerospace industry, relates his investigation of the Marfa Lights, which he also chronicled in three previous books (Hunting Marfa Lights, 2009, etc.). The lights are famous throughout North America, but particularly in the Lone Star State. These illuminated orbs have a history dating back to the Native Americans (who thought they were stars fallen to Earth) and cowboys (who mistook them for Native American campfires). Now they are a major attraction in Marfa, complete with an official public viewing area overlooking Mitchell Flat. While an ideal vantage point, Bunnell writes, the area also encompasses passing traffic, mirages, all-night ranch lights, aircraft navigation beacons, and even a tethered Air Force blimp. Cumulatively, these look-alikes, often mistaken for the genuine article, inspire dismissals from skeptics. The Marfa Lights (which Bunnell calls “MLs” for “mysterious lights”) really do exist, he claims, and he presents many full-page color reproductions captured on film and video and with a specially modified Canon digital SLR camera able to show infrared sources. His judgment: MLs exhibit both electric-plasma and heated-chemical (burning) qualities. The lights themselves, significantly, resist wind currents, though their heat signatures do not. Conspiracy theorists and believers in aliens, UFOs, and ghosts will likely be disappointed by Bunnell’s amazingly speculative but rational geological (para-geological?) explanation for MLs. Because the author has written extensively about the lights before, this summation has a bit of a patchy feel, more technical manual than a cohesive narrative of one man’s decadeslong search for an incredible truth. And, while some close-up MLs encounters were evidently unsettling to witnesses, Bunnell isn’t out to scare anyone. This is specifically for the benefit of aspiring Scullys and Mulders who Want to Believe and investigate for themselves, complete with numerous maps, do’s and don’ts, and tips on the terrain.

A required field manual for chasers of illuminated orbs that lacks a wide appeal.