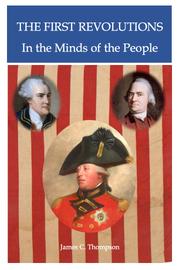 THE FIRST REVOLUTION IN THE MINDS OF THE PEOPLE

A spirited reconsideration of the causes of the American Revolution that takes aim at the views of acclaimed historian Bernard Bailyn.

Author and lecturer Thompson (The Dubious Achievement of the First Continental Congress, 2011, etc.) offers a reinterpretation of the Revolutionary War era that focuses on dynamic plays for power rather than a more romantic vision of it as a leap forward for social justice and a commitment to democratic ideology. In fact, he avers, the war wasn’t democratically chosen at all but was the result of the relentless agitation on the part of “a radical fringe of malcontents.” In 1760s England, he says, a “new underclass” appeared as a result of the birth of industrial society, creating an opportunity for a “political pest” named John Wilkes. His “rallying cry” for liberty, Thompson says, was picked up in the Colonies by Samuel Adams, the older cousin of John Adams, who used a message of “natural rights” to spark a political revolution that was performed in two acts: First, it was argued that King George III had violated the colonists’ civil rights via taxation without representation, and secondly, that he had infringed upon their natural rights. However, the author points out that even as late as 1775—approximately a decade into Adams’ indefatigable campaign—the vast majority of colonists still opposed a war for the sake of secession. In lucid prose, which draws on painstakingly meticulous research, Thompson goes on to show the ways in which Adams and Thomas Jefferson heavily relied upon the natural rights philosophy of the British philosopher John Locke, although he contends that their interpretations fashioned Locke into a far more radical thinker than he actually was.

Thompson’s argument is a concise one as laid out in this book, and it’s remarkable how much historical territory he covers in a relatively short monograph. He also provides readers with incisive introductions to Adams and Wilkes, two extraordinarily important figures in early American history who are sometimes denied their rightful stature. Although the author’s position is not entirely original, he presents a clear encapsulation of an alternative reading of the nation’s genesis. However, he often undermines his argument by employing gratuitously inflammatory rhetoric. In fact, much of the book is an explicit critique of Bailyn’s Pulitzer Prize–winning 1968 book, The Ideological Origins of the American Revolution, which Thompson characterizes as “demonstrably false” or disingenuous. If Bailyn overstated the moral and ideological elements of the American Revolution, it seems that Thompson is just as reductionist in the other direction, as he argues that the “visionaries” behind the revolt did not mean to “encourage public deliberation, but to destroy their opponents in the mind of the people and to build parties that would help them to gather the political power they needed to promote their own ideologies.” Furthermore, it seems rather hyperbolic to claim that Jefferson’s view of natural rights is “nothing like Locke’s,” even it is different in many respects.

An often astute and scholarly work that’s hampered by its reductionism.