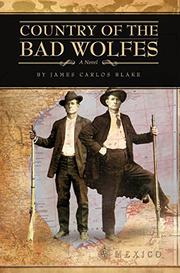 COUNTRY OF THE BAD WOLFES

A rollicking, shaggy-doggish yarn of life in 19th and early-20th-century Mexico and the Wild West by prolific historical novelist Blake (The Pistoleer, 1995, etc.).

The author concentrates on telling a tale that on its face is simple, but that acquires depth as it moves across generations and national boundaries. Based on family history, Blake’s story begins in New England, its chief characters, at the start, the twin sons of an adventurous ship’s captain long lost at sea—or so their mother tells them. In fact, papa is a rolling stone, and so, it seems, are all the Wolfes, who just can’t stay put. Pop, we learn, also had an establishing trait: “He was not tall but carried himself as a tall man.” And so, across the bloodlines, do the other Wolfes, stiff-necked in their pride, always ready for a scrap—and, for that matter, a dalliance of the sort that Blake describes in language that would earn a film version an R rating (“breasts upraised and nipples puckered and lean belly sloping to a rubric delta”). Blake doesn’t mind a boudoir, but his real strengths come in describing manly mayhem during a time of revolution, as well as death, which he portrays with uncommon poetry (“He felt his entire body constrict and he doubled over, hugging himself, breathless, his cry stoppered in his throat”). In such matters, Cormac McCarthy’s tutelary spirit is all over this book, but there are soupçons of García Márquez as well (“in the final days of 1910, some years after finally accepting that she was past all possibility of conception and at last acquiescing to sexual intercourse with Amos Bentley...”).

We’re in McCarthy territory in much of Blake’s latest, but without the dazzling verbal pyrotechnics. That’s not to say that the book is derivative—merely that it keeps good company. Blake’s tale is involved and a touch too long, but full of wry humor and thoughtful writing.

THE HOUSE OF WOLFE
by James Carlos Blake
Mystery

THE RULES OF WOLFE
by James Carlos Blake
Fiction

THE KILLINGS OF STANLEY KETCHEL
by James Carlos Blake
Fiction

UNDER THE SKIN
by James Carlos Blake
Fiction

THE CROSSING
by Cormac McCarthy
Indie

MEXICO
by James A. Michener
Mystery

THE HOUSE OF WOLFE
by James Carlos Blake
Newsletter sign-up