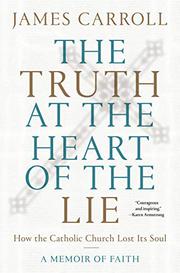 THE TRUTH AT THE HEART OF THE LIE

How the Catholic Church Lost Its Soul

A deeply personal exploration of what has broken the modern Catholic Church.

Using his own vast experience, former priest and accomplished religion journalist Carroll, author of such landmark works as An American Requiem and Constantine’s Sword, demonstrates to readers why the Roman Catholic Church is in a state of international crisis. The author’s detailed, honest, and brutal treatment of his subject matter is consistently captivating. He identifies the primary issue as “clericalism,” a dysfunctional, exalted view of the clergy that has led to systemic, generational misogyny and, ultimately, to the reprehensible child molestation crisis that has become, over decades, horrifyingly widespread. Carroll looks back on centuries of warped theology and abuses of power while also telling his own story of growing up in the pre–Vatican II church and finding disillusionment later. He describes 21st-century corruption as stemming from the work of thinkers who died centuries ago. Augustine of Hippo (354-430) and Anselm of Canterbury (circa 1033-1109), both of whom were later designated as saints, advanced theological beliefs about sex, the body, and women that celebrated the sanctity of the priesthood in damaging ways. Augustine, writes the author, formed an “anti-human theology,” and through Anselm’s influence, “death trumped life in the Catholic imagination.” Over time, the ossified, male priesthood became an exceedingly powerful force, featuring extraordinary abuses of power and a distorted view of Christ and his church. Carroll saw this firsthand in his interactions with priests and monks throughout his youth and early adulthood. Disenchanted with the church after it ignored the attempted reforms of the Second Vatican Council, the author left the priesthood and, eventually, almost left the faith. He is still a believer, however, and urges others to join him in enacting “an anti-clericalism from within,” delivering a book that seamlessly combines moving, forthright autobiography and searing critique.

Balanced yet uncompromising, an urgent call to action for believers and a fitting capstone to a fruitful career.