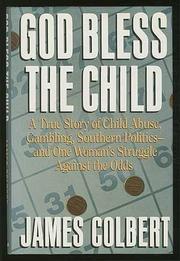 A True Story of Child Abuse, Gambling, Southern Politics--and One Woman's Struggle Against the Odds

Engrossing tale of the unlikely alliance of a tenacious child-worker and a professional gambler that reformed the treatment of abused children in Mississippi. Colbert is the author of four crime novels (All I Have is Blue, p. 570, etc.). At her Baptist church, Sue Haworth met a 15-year-old girl from the Youth Detention Center. The girl was surly and scared- -both her parents were dead, and she lived in a jail cell because Mississippi had no place for her. Haworth went to Juvenile Court and discovered that, in her own county alone, there were 1,300 cases of child abuse a year but only one shelter—in an old house—for abused children; that child workers were struggling with case loads of 200 (the national average was 30); and that Mississippi spent only $4 million annually for its abused children (neighboring Louisiana and Alabama budgeted $43 million and $41 million, respectively). Raising the money herself (and not too proud to pick up empty soda cans for pennies), Haworth started child-protection programs—the first of which sent aides into homes to teach parenting skills. Needing $6,000 to train volunteers to help children through their court days, Haworth went to Robert Malone—the biggest bingo operator in the area. He gave her the money without hesitation, and promised regular donations. But then Malone was charged by the state attorney general with racketeering (insiders thought that the attorney general, poised to run for governor, wanted to demonstrate an antigambling stance). Malone appealed, and bingo was permitted for 90 days while the court cogitated. Haworth and Malone swung into action: They opened the combination Bingo Depot and Offices of the Mississippi Committee for Child Abuse, generating enormous publicity and public dialogue about Mississippi's system. An exemplar of vision and perseverance—and a darn good yarn. (Photos—not seen.)