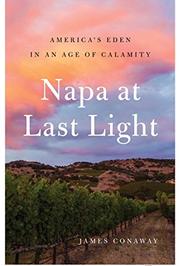 America's Eden in an Age of Calamity

In the third volume of his trilogy about Napa, California, Conaway (Nose, 2013, etc.) continues his investigation of the consequences of the wine industry on the region’s culture and environment.

Both, argues the author persuasively, suffer at the hands of greedy winemakers, huge corporations, and the desire of merchants to attract more and more tourists. As in his past books, this one is filled with detailed—and sometimes overly detailed—sketches of a large cast of characters. Conaway profiles more than 60 individuals who, in one way or another, affect Napa’s life and fortunes. These include winery founders, vintners (“mostly an ornamental title nowadays”), growers (a dwindling number), inheritors, and the handful of determined citizens working hard to defend the ecology and integrity of the land they love. The author notes that nearly half of the population of Napa Valley lives at or below the poverty line; housing is “prohibitively expensive, the roads crowded, cancer rates high, and the glaring disparity between incomes growing.” But his focus here is not on economic or health problems but rather on environmental damage when agricultural production is impeded by marketing, when wineries are converted “into retail shops, conference pods, and de facto restaurants.” Wineries, he writes, have become “self-interested fiefdoms” overseen by astoundingly wealthy vineyard owners, too often international corporations. Some vintners have no knowledge of grape-growing and little interest in the actual work of farming. Many, Conaway writes, “are caught up in what amounts to a parody of viticulture, elaborate dramas of money and celebrity far removed from the dust from which hope springs eternal.” One man, seeking “self-realization” as a vintner, confessed that he wanted to make “a difference to people and their experiences,” which, Conaway says scornfully, “is what real estate development and tourism are all about, not agriculture.” The author ends on a “guardedly optimistic” note, citing citizens’ successes in holding back development and exploitation.

A strong plea for responsible stewardship of the land.